Welcome to another school year! For some, it is returning to the same school with the same friends. For others, this may be a very scary time as they are starting in a new place without anyone familiar. Here are some helpful tips to think about when it comes to making friends and having a great school year:

Say hello. Greet classmates you haven’t talked to before – hello is the first step toward making a new friend. Make a goal to talk to one new person a week.

Forget stereotypes. Don’t stereotype schoolmates by the groups they belong to and don’t limit yourself to your current group.

Be involved. Extracurricular activities are opportunities to meet others who like the same things you do.

Be better. You don’t have to be the same as you were last year. The older you become, the more life experience you have, the better your social skills become.

Ask for advice. If you’re having trouble making friends or keeping friends, turn to people you respect to talk about your difficulties.

Be a good friend. Treat others the way you want them to treat you.

Be trustworthy. Keep your friends’ secrets and confidences, no matter how tempting telling others might be.

Be truthful. Lying might feel easier, but the truth eventually comes out and makes the situation much worse.

Speak up. If you see someone bring bullied or called names, stand up for the victim.

Apologize. If you hurt someone or mistakenly do something you shouldn’t have, say you’re sorry.

If you would like to learn more about random acts of kindness, contact Simple Acts of Care and Kindness at 866-459-7225 or visit www.simpleacts.org for additional information.

THURSDAY, July 22, 2021 (HealthDay News) — Youth who identify as LGBTQ+ suffer more bullying at their schools when they live in areas with politically conservative voting records, a new study finds.

School boards should do more to implement policies that go beyond minimum protections for LGBTQ+ youth, regardless of political affiliation, the researchers suggested.

“To my knowledge, nobody has really looked at this connection between a school district’s political attitudes and the experiences of LGBTQ+ students in schools,” said study co-author Paul Kwon, a professor of psychology at Washington State University. “This project highlights an inequity that is not talked about a lot and shows the need for more explicit and inclusive anti-bullying legislation and policies that help mitigate the risks to LGBTQ+ youth, regardless of district political attitudes.”

The study examined school district voting records in the 2016 presidential election, as well as bullying experiences in schools and mental health outcomes of LGBTQ+ students in Washington state using the 2018 Washington State Healthy Youth Survey. The survey included 50,000 students in grades eight to 12, asking about sexual and gender identity, bullying and whether or not teachers intervened during instances of bullying. About 20% of the students included in the survey identified as being LGBTQ+.

Researchers found that LGBTQ+ students are at a higher risk for psychological distress and suicidal thoughts as a result of bullying, particularly in school districts that voted for former President Donald Trump in the 2016 election. These students also reported their teachers were less likely to intervene in instances of bullying than students who responded from more liberal voting districts. The study only found an association between political leanings, bullying and teacher intervention; it wasn’t designed to prove a cause-and-effect link.

In areas where teachers intervened almost always, instances of bullying for LGBTQ+ students matched their non-LGBTQ+ peers, whereas without intervention the LGBTQ+ students reported more bullying.

“This was especially prevalent in more conservative school districts where LGBTQ+ youth report less teacher intervention despite experiencing more bullying,” Kwon said in a university news release. “Over 35% of youth in our study are students in a conservative-leaning school district, possibly placing them at greater risk for more bullying experiences and higher psychological distress.”

The researchers suggested school policy should include explicit parameters for training and education for teachers regarding LGBTQ+ bullying, as well as steps for teachers and administrators to intervene following LGBTQ+ bullying experiences. All school websites should explicitly describe anti-bullying policies as they relate to LGBTQ+ youth using specific examples, the authors said.

“We also recommend educators discuss anti-bullying policy with students and families at the start of each school year, while concurrently highlighting LGBTQ+ identities, particularly in conservative districts,” Kwon said. “After all, students have little choice in the school they attend, almost no choice in the school district they belong to and are unable to vote until they are 18. Thus, they are subjected to the environment of the school and broader culture of the school district chosen for them.”

The findings were published recently in the journal Analyses of Social Issues and Public Policy.

If you would like to learn more about anti-bullying efforts, contact Simple Acts of Care and Kindness at 866-459-7225 or visit www.simpleacts.org for additional information.

ABBOTSFORD (NEWS 1130) — When nine-year-old Hudson Walters saw and heard some of his classmates being bullied, he was disappointed.

“A lot of kids in my school were getting bullied because of their weight, and how they look,” he tells NEWS 1130.

While Hudson is a big fan of telling the bullies to leave the victim alone and inviting the person at the receiving end of taunts to come play with him, he wanted to do more.

After some time to think about it, he decided to go to his mom to figure out if there was some way to send a message of kindness and positivity.

Tonight on @NEWS1130: we’re hearing from a 9 y/o boy in #AbbotsfordBC fundraising to give friendship bracelets to kids at his school. Hudson wants to share a message of positivity & to educate those who bully…he also wants to change the perception around bullies. Details at 7p.

Karen Walters says she was proud to hear of her son’s ambitions, but he wasn’t sure how exactly to help.

“He was like, ‘I don’t really like calling kids bullies because they’re just kids and learning and they need to learn, so I want to show them a way to tell other kids that they’re your friend,’” she says.

They ended up going with friendship bracelets, and Hudson’s goal is to give one to each kid in his school just in time for Pink Shirt Day, which is set to take place on Feb. 24.

Hudson thinks that if kids may say or do something mean and they’re looking at the bracelet, it’ll make them think twice about their actions.

“I want it to succeed and I hope everyone has a voice,” he says.

Karen believes the bracelets will be a simple reminder that kindness is key.

They’re looking forward to ordering the silicone bracelets – and hope to put the word ‘friendship’ on each one.

Just days after the GoFundMe was posted, Hudson’s efforts raised more than $600. His mother is hoping the extra money can be used for a program at the school that can help Hudson’s message continue to last.

If you would like to learn more about anti-bullying efforts, contact Simple Acts of Care and Kindness at 866-459-7225 or visit www.simpleacts.org for additional information.

Summer is officially coming to a close and it’s time to start preparing for a new school year. But what kind of school year are we preparing for? With this new way of getting an education, there are going to be lots of changes to look forward to. But it can be a scary time for our little students – with the new classes and schedules to get used to. Let’s help our tiny scholar’s off on the right foot with these back-to-school tips:

Meet the new teacher. If you are going to be exposed to in-house classes, there will be lots of changes to the typical classroom experience. Take advantage of any of your school’s open house or back-to-school night. Some teachers welcome phone calls or e-mails — take advantage of the opportunity. Open house is also a great way to get your child familiar with the new areas they will be using on a daily basis. Together you can meet their teacher, find their desk, or explore the playground.

Connect with friends. A familiar friend can make all the difference when heading back to school. If there’s a change for a socially distant play date, it could help ease fears about the changes.

Tool up. While keeping the class supply list in mind, allow for a couple of splurges like a cool notebook or a favorite-colored pen. These simple pleasures make going back to school a lot more fun.

Ease into the routine. We have been living inside for a long time now, schedule changes will take a minute to get used to. Balancing in-house and home school sessions will take some time.

If you would like to learn more about back-to-school, contact Simple Acts of Care and Kindness at 866-459-7225 or visit www.simpleacts.org for additional information. 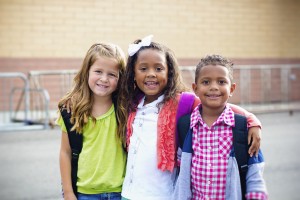 Summer is officially coming to a close and it’s time to start preparing for a new school year. We get our supplies ready in our brand-new backpack and set our bedtimes back in order to get enough sleep. But it can be a scary time for our little students – with the new classes and schedules to get used to. Let’s help our tiny scholar’s off on the right foot with these back-to-school tips:

Tour the school. Open house is a great way to get your child familiar with the new areas they will be using on a daily basis. Together you can meet their teacher, find their desk, or explore the playground.

Connect with friends. A familiar friend can make all the difference when heading back to school. Refresh these relationships before school starts by scheduling a play date or a school carpool.

Tool up. While keeping the class supply list in mind, allow for a couple of splurges like a cool notebook or a favorite-colored pen. These simple pleasures make going back to school a lot more fun.

If you would like to learn more about back-to-school preparations, contact Simple Acts of Care and Kindness at 866-459-7225 or visit www.simpleacts.org for additional information.