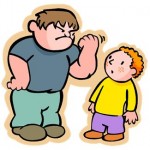 Most people reading this information right now know a child who has stayed home from school this week because they were afraid of being bullied – but you may not realize it. The estimations are that an average of 160,000 students around the country stay home daily out of fear of being bullied each day. But adults, for many of reasons, have no idea that the bullying is taking place.

For those parents and adults who may be wondering why the children are not telling them that they are bullied, there are 5 universal reasons:

Around half children who are being bullied don’t end up telling an adult that it’s happening. The more we as parents and adults can understand about the issues and address the reasons behind them not telling, the easier it will be to help solve the bullying problem our nation’s children and schools facing.

The challenges that children face when not telling adults that they are being bullied can be dealt with and defeated. This can happen by having a bully prevention program in place in every school, as well as parents and adults talking to children about bullying and the importance of telling someone in authority when it happens. It is also vitally important that when children do tell adults about bullying that it is addressed in a positive manner so that they feel confident in their decision to report it the next time it happens.